Shortly after I received and reviewed The Whole Life Nutrition Cookbook I received a package in the mail – a new cookbook from the same publisher! It appears I now have been invited to do some reviewing! 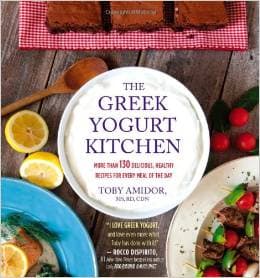 I’m not one to let this opportunity pass up – so I decided to explore a couple of recipes included. My stomach is not too keen on excessive dairy so it was going to be a short and sweet ride back into the yogurt world. I cracked open The Greek Yogurt Kitchen and immediately noticed it had a very standard traditional tone to it.

The book, written by a registered dietitian, follows more mainstream ideas on healthy eating so there were recipes which included ingredients such as white flour and sugar that I do not keep in my kitchen nor advocate anyone else keep in theirs (white sugar’s sole great uses are to feed kombucha scobys or to make into a body scrub; white flour makes great paste for kids’ art projects). The book also had a strong emphasis on calories – all macronutrient data was laid out for each recipe and discussion of slashing calories and fat by using Greek Yogurt were peppered throughout. There’s nothing wrong with this – it just isn’t my nutrition style.

That said, it’s really easy to make substitutions for the white flour and sugar listed in the recipes. I made chocolate hazelnut pudding shooters and used organic cane juice instead of confectioner’s sugar. The outcome was fine; the recipe was still a touch too tart for me but I am still totally stealing the author’s idea of making ‘pudding shooters’ in shot glasses for easy portion control.

I think the most versatile recipe I tried was the Wasabi Sesame dip. I’ve used it straight up as a dip for veggies, used it as a creamy salad dressing, and was thinking tonight how much it would kick but as a marinade for salmon the next time I grill it. Wasabi Sesame dip *is* an awesome sauce.

Nutritional differences aside, I appreciate Toby’s creativity in her cookbook. I never would have considered a lime mint coleslaw or adding traditional Japanese flavors to a creamy dip. I still have yet to try her mojito popsicles; all that is stopping me is lack of Popsicle molds. I do believe that mojito popsicles may change my life.

Want to try these recipes? I’m giving away my copy of the Greek Yogurt Kitchen!