Oh, cauliflower! Is there anything you can’t do? 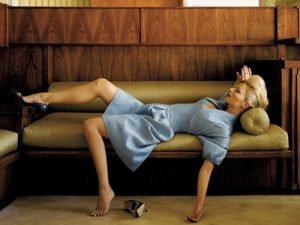 My first taste of Gobi Manchurian was a handful of years ago from Indian Food takeout in Portland. I was blown away by the complexity of taste and texture in these little nuggets of fried cauliflower and knew I had to make it myself. Upon exploration, I discovered it was breaded and fried, so I wanted to create a recipe that was more aligned with my eating style. I took to Pinterest, grabbed a couple recipes, and sat on the idea over the next four years but never forgot that dish.

Fast forward to last month, when I found myself overloaded with cauliflower due to a shopping snafu. I had already made Buffalo Cauliflower and Cauliflower rice, so decided this was going to be the moment that I put my procrastination abilities to fine use; I was going to avoid studying by trying to recreate Gobi Manchurian!

Gobi Manchurian is the result of the Chinese influence on Indian food (yeah, I didn’t know that happened either, although it is rumored to be in only one small area of India) and it is definitely the case of two great tastes tasting great together. Traditionally, cauliflower is dipped into a spiced batter and then deep fried, but I opted to bake it instead.

Here’s the recipe I came up with: 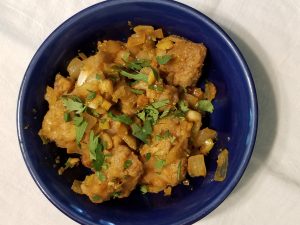 *less water may be needed if using an alternate flour

In a medium mixing bowl, add cassava flour, pepper, garlic and ginger. Mix to combine well. Drizzle coconut aminos and oil over mix, then add water slowly, mixing it in until the consistency is like thick pancake batter. Coat the cauliflower with the batter, and set the cauliflower on a baking sheet lined with parchment paper or a well-oiled baking sheet.

Roast cauliflower for 20 minutes, turning once to brown on all sides.

Mix sesame oil, ginger, garlic, hot sauce, tomato paste, vinegar, honey, and coconut aminos in a blender and blend to combine thoroughly and more finely dice the garlic and ginger. Saute the onion and chili over medium high heat with a dash of oil and about 2-4 tbsp. water to ‘steam saute’ until the onion is translucent. Add the sauce and remove from heat.

When browned, remove cauliflower nuggets from oven and let cool slightly. Toss in the sauce until well coated, and then fold in diced scallions and cilantro.
Serves 4. 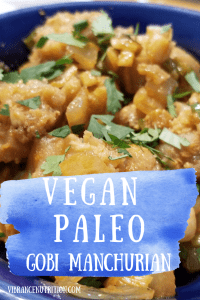