When I was pregnant I had an unbelievable craving for cheese danishes that began my first trimester. The nearest Whole Foods made some that were the perfect blend of sweet, tart, flaky and creamy. I would get one a week, then disciplined myself to pull back to one a month…then they were gone.

The baker said something about a cheese supply issue, but I don’t know what the true story is. All I know is they have never returned. I tried other danishes, but they just lacked the flakiness, or the cream cheese filling tasted like pudding and not cheesecake; no other danish came close to what I was seeking.

Not that this is a bad thing! With a gluten and dairy intolerance I did not need to be messing with such foods in the first place. My body, overtaken by the Fetus formerly known as Squish, was calling all the shots and the miracle of pregnancy was temporarily protecting me from the symptoms of my intolerances. So I pushed the envelope on those dietary boundaries a bit for the first 30 or so weeks of my gravida.

The lust for the cheese danish did not wane after my delivery, but I have long given up on finding an adequate replacement for my love of the Whole Foods Cheese Danish. One evening, whilst tinkering around on Pinterest, I came across a recipe for a grain-free, low sugar cheese danish. I pinned the recipe to my page in hopes of coming back to it and giving it a whirl. If I couldn’t get what I really wanted, perhaps a ‘out-in-left-field’ gluten-free, sugar-free, higher protein version would give me enough sense of Danish but not have the dire consequences of a substandard glutenous one.

Here is a picture of the original recipe, as posted by the author. 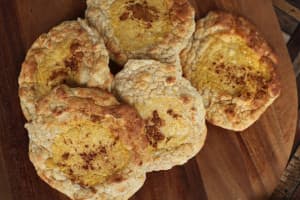 Granted, it does not look like a real danish. There is no hiding the lack of flakiness there. But it kind of looks edible, right? If you squint your eyes and have been danish-free for 180 days you might find this tasty and enjoyable!

So I decided to give it a go.
Starting the recipe by splitting eggs into yolks and whites, I went in search of that container of egg white protein I bought several months back. I couldn’t find it anywhere. Thinking I was having a sleep-deprived mom moment, I looked high and low – I DID buy that container of Jay Robb, right? Maybe my Hubbs ate it all…maybe I imagined the whole thing…all I had was plant proteins in the house.
FAILING #1: The wrong protein powder

I knew this was a risky substitute. Egg protein is lighter and coagulates at high temperatures. Pea/Rice blends are much denser and have no coagulation factor. I had 2 hours of baby-free time, which did not allow me enough time to run to the store and get egg white protein. So I found the best smelling vanilla plant protein in the house (TIP: when using protein powders as substitute for flour, the end product WILL TASTE like the protein powder. This cannot be avoided) and set it aside.

Then, per instructions, I tried whipping the egg whites.

FAILING #2 – A Vitamix does not whip egg whites; it destroys them.

After whipping and whipping at a low enough speed they would not cook, I still did not have stiff peaks. A little bit of googling enlightened me to the fact that a Vitamix is just going to overbeat egg whites, period. It is akin to using a wrecking ball to nail a picture to a wall.

THE SHOW MUST GO ON!
I mixed the protein powder and dry ingredients into the overbeaten egg whites and prayed for the best. The batter was thinner than it likely should have been; maybe it would firm up on baking? The cheese filling was tasty; at least I had that going for me. I assembled the rest of the ingredients, set it in to bake as directed and VOILA! 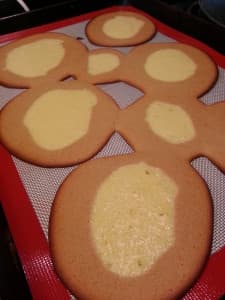 I posted the picture on Facebook to see if anyone could guess what these were supposed to be. No one even came close. How could they? Is it an undercooked pancake? A cookie? Or, my favorite, “custard bologna” – but that’s a natural and logical assumption of what these are!
My last hope was that they would taste good. The vanilla would come through, maybe it’d be like a custard filled cookie. But the flavor was bland and dead, the texture rubbery (in fact, when throwing them away I folded them into one big origami danish of doom), and the sweetness was baked out of the cheesy filling so it was a wholly unsalvageable product. Thank goodness for compost!

At least I had some good laughs that afternoon, and have one recipe I can scratch off the list as having ‘tried’.

Do you ever have any epic kitchen fails? Tell me ll about it in the comments section!