A neighbor of mine gave me a huge gallon ziplock bag full of Mortmorency cherries from his friend’s tree in exchange for a kombucha scoby. Having never worked with fresh tart cherries before I knew I was in for a treat. I immediately went to Pinterest, Google and my standby, The Flavor Bible, for some ideas. Here’s dinner tonight, adapted from a recipe I found on the Cherry Marketing Institute website. 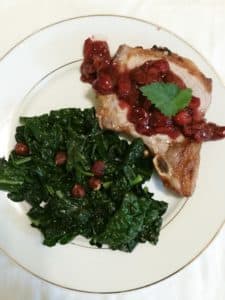 Bring pork out of the refrigerator to warm slightly.

In a medium saucepan, stir together the tart cherries, red wine, orange juice, maple syrup and rosemary. Bring to a boil and cook for 2 minutes, stirring frequently. Reduce heat to medium-low and simmer for about 10 minutes. Whisk in the arrowroot and turn off heat, allowing the sauce to gel slightly.

Turn the oven on broil.

Inflammation Can Make You Fat

Obesity is associated with chronic, low-level inflammation. In some cases it can be hard to determine if obesity or inflammation came first, as each condition feeds upon the other. For the purpose of this brief article I will exclusively discuss inflammation’s role in obesity promotion.

Inflammation can promote obesity through disrupting the body’s ability to regulate blood sugar. An effect that many cytokines have on the body over time is insulin resistance. Cytokines are a normal, natural response to inflammation in the body. They act as signalers to other cells to alter the immune response. TNF-α and IL-6 are cytokines that specifically promote insulin resistance in the body (Wellen & Hotamisligil, 2005). One study (Hotamisligil eta l., 1993) demonstrated that administration of recombinant TNF-α to cultured cells or to whole animals inhibits the action of insulin; this action is supported in a later study observing obese mice without TNF-receptors having better insulin sensitivity over their wild-type brethren (Uysal, 1997).
When the body is in a state of insulin resistance, additional inflammatory markers such as IL-1 can be increased, perpetuating inflammation and the cascade of cytokines system-wide. Untreated, chronically elevated insulin levels also make weight loss more difficult and drives cravings for foods which exacerbate weight gain, such as refined carbohydrates (Heller, 1994).

An anti-inflammatory diet is one that is rich in vegetables, fruits, unprocessed whole grains and lean proteins. It focuses on these foods, thus crowding out foods which elevate insulin such as white sugar, white flour, corn syrup, and processed food products. By focusing on reducing inflammation rather than counting calories, some individuals can regain mobility, energy, and improve their overall health while they lose weight without focusing on common weight-loss tactics which have a high risk of failure.